Wyatt Speaking Out and Making Friends at Little Lukes Preschool 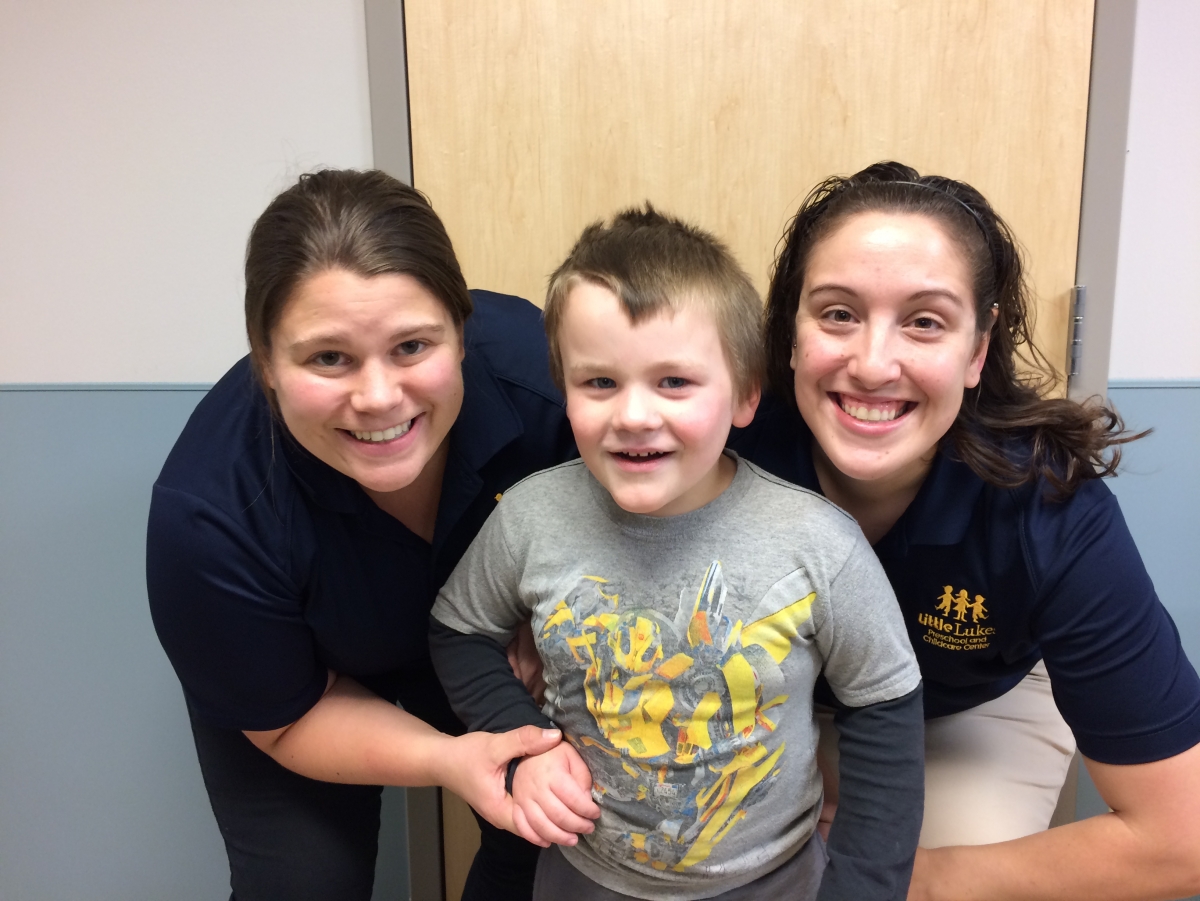 13 months ago, Wyatt’s mother Stephanie would have never imagined her son to be where he is today. For Stephanie, making sure her son was comfortable in a childcare facility while being treated as an individual was top priority. Stephanie believes Little Lukes has surpassed her expectations in a childcare facility, and is thrilled with the positive results seen in her son’s behavior and academics since starting at Little Lukes.

“Little Lukes is such a wonderful place that really helps children grow and learn! All the staff is wonderful and really puts in a great deal of effort and goes above and beyond for not just the children, but also the parents. They really do want to see the kids succeed, and are right there celebrating those small and large successes with the parents!” – Stephanie Wyatt's mother.

When Wyatt first started at Little Lukes a year ago, he was very non-social and almost completely non-verbal. Now, Wyatt is a social butterfly and finds curiosity in what his peers are playing with and working on. He also has grown to express himself and his basic needs, and practices his please and thank you’s every day. Wyatt’s mother Stephanie is thrilled to see her son’s ability to focus on tasks, even for a few minutes. And a result, Wyatt has come a long way academically, he now knows and recognizes all his letters, can count to thirty, and knows all his colors, animals, and shapes. Before starting with Little Lukes, Wyatt was completely unable to focus on simple tasks, communicate with his peers, and practice his manners, now all struggles of the past for Wyatt.

Stephanie added that Wyatt’s new skills were showcased this past Halloween holiday when “we took him trick or treating for the first time this year. Not only was he walking nicely and holding my hand, but at the doors he would ask ‘trick-or-treat’ and say ‘thank you’. It was so awesome! A year ago I would never had thought we would be that point in 13 months”.

At first, Stephanie was hesitant to leave her son at Little Lukes Preschool and Childcare Center, since he struggled in communicating and behaving properly with others. In Wyatt’s specific case, Stephanie was worried her son’s sensory processing disorder was overshadowing his ability to preform typical activities at his age. For any parent, overcoming these roadblocks with their child can sometimes feel impossible, but Stephanie has found that the wonderful staff at Little Lukes has put her son first, and that they give him the special attention he needs to be the best he can be.

“I was very nervous at first, leaving Wyatt with a bunch of people I didn’t know when he had such a hard time communicating. But everyone was very warm and inviting. Very patient with not only Wyatt, but myself as well! The staff at Little Lukes takes the time to answer my questions and tell me how his day went.” – Stephanie Wyatt's mother.

“They definitely go above and beyond, you can see it every day just by paying attention around you as you walk through.  Staff members are always very friendly and welcoming. The staff gets to know the kids even if they are not working directly with them. So many staff members say hello to Wyatt every morning by name, and he has never had them as a teacher! They also take time with the kids. At first, Wyatt had a very hard time transitioning into class every day, more days then not there were tears, not only from Wyatt but also myself. The staff was always great! They always tried new things to make it easier, never showing any frustration with the situation. They are always patient and kind with him”, says Stephanie.

Seeing the staff at Little Lukes work so well with the children was very important for Stephanie, as she was worried Wyatt would feel uncomfortable in a new environment without her by his side. However, Wyatt beginning at school has been much easier than expected for Stephanie, and has been a true learning experience for both Wyatt and Stephanie. We can’t wait to see Wyatt continue to grow and learn with us at Little Lukes!