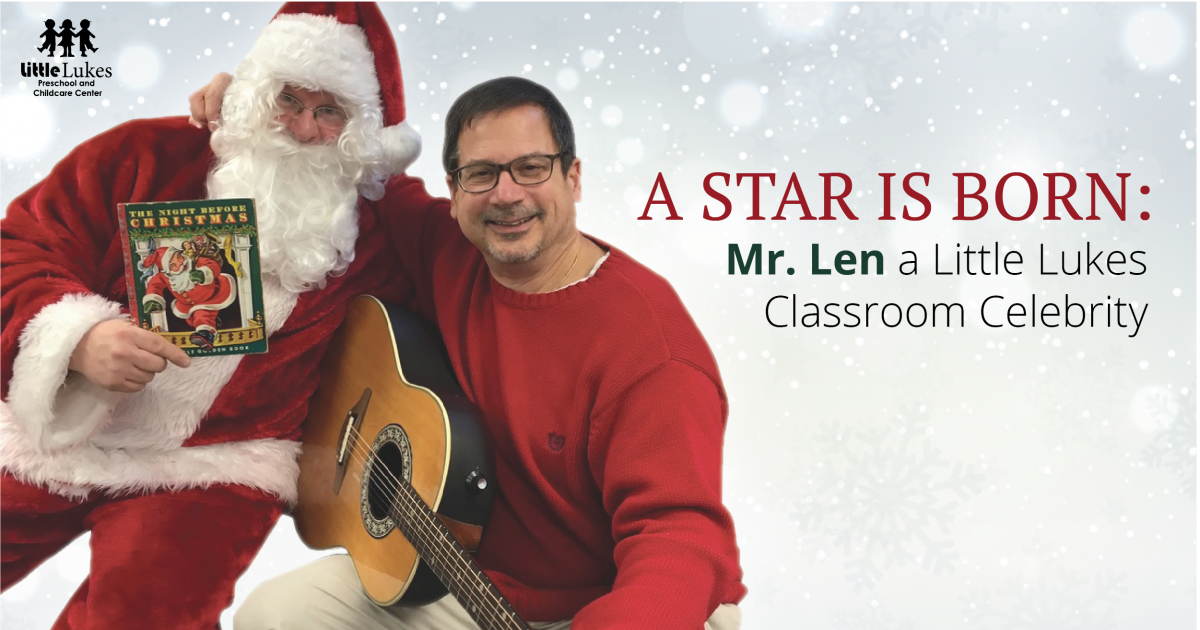 While perusing produce in his local grocery store, Len Cisternino feels a light tap on his shoulder.

As a vocalist and musician for a variety of bands his entire life, the Syracuse native conjures a special awe and admiration around town. But it’s not the restaurant gigs and packed concert venues that land him the most notoriety, but a daycare classroom setting.

Mr. Len is a local legend, a captivating carpet-time performer. With guitar in hand, Mr. Len has been strumming, singing and interacting with students at Little Lukes Preschool and Childcare Center in Central New York since June 2014. His 30-minute music therapy sessions form confidence, communication and motor skills.

With a Bachelors Degrees in Sociology from Le Moyne College, it wasn’t in the former social worker’s initial timeline to teach music.

“The root, the reason why I started music therapy was for my own children,” said Mr. Len. “I have four kids, all much older now. Around Christmas time from kindergarten to second grade I would actually take a day off of work for each of them to visit their classrooms. I would spend the entire day strumming holiday sing-a-longs on my guitar.”

He brought microphones and a variety of instruments into the school to empower toddlers to play, create and become comfortable with their own voices. A handful of other daycare centers got wind of Mr. Len’s undeniable musical talent and engaging lessons. He was soon requested by name to become a fill-in for a music teacher who was vacationing and travel to other daycares to host a music class. On a yearly basis he was and is still asked to be the music director for a local nursery for two months.

“Actually, that’s where the name Mr. Len originated from, from that nursery. I remember them asking, ‘You don’t mind if we call you, Mr. Len, do ya?’ I said, ‘Let’s do it. I like it. It’s simple. It’s different.’”

And so his preschool “stage name” was born.

Finding a Passion for Music

“Without the Beatles, I would have never had an interest in music,” said Mr. Len. “I tell the Little Lukes kids that all of the time. On occasion I’ll sneak ‘A Little Help From My Friends’ or ‘Yellow Submarine’ into one of the sessions.”

In 1964, the first time Mr. Len saw the Beatles on a black and white TV changed something inside of him.

“From then on, music became everything. I bought every single Beatles thing I could find which I still continue to do. Re-mastering, a deluxe set, you name it. I just keep getting it. It doesn’t make my wife the happiest,” he chuckled.

The self-taught guitarist (learning the instrument long before the days of YouTube) visits each of the five Little Lukes centers once a month, usually doing six, half hour sessions in one day. He likes to keep the class sizes small to encourage participation and develop a higher comfort level for children to sing or play an instrument in front of peers. He takes the time to help the shy break out of their shell, little by little.  Mr. Len loves Little Lukes Preschool inclusive classes, working directly with students with special needs.

“Little Lukes has the best staff, the best directors, the best program and I only get a glimpse of their day,” said Mr. Len. “The participation, the environment is incredible. I tell all the kids who graduate preschool, ‘I know you’re going to do great in kindergarten. Do you know why? Because you went to Little Lukes. You are ready!’”

While the classics “Twinkle Twinkle Little Star”, “Wheels On the Bus” and the “ABCs” are always a hit, his repertoire has expanded to the theme songs of Paw Patrol, Batman, Spiderman and other fan requests. Although he likes playing these songs, there’s only a certain time of the year that he can play his favorite kind of music (not including the Beatles, of course).

“It goes back to my roots of when I first started playing in classrooms. I love when Christmas time rolls around and we play seasonal songs and read ‘The Night Before Christmas’. Santa even stops by for each of those holiday preschool classroom sessions. It’s pure magic to see the kids’ faces light up with such joy.”

In a way, Mr. Len draws comparisons to Santa. With a bag of instruments over his back, he gives the Little Lukes children gifts. These gifts aren’t the kind that can be wrapped, but rather seen over time – confidence, communication and fine motor skills.

“There’s no way I could perceive this was going to be part of my retirement. It’s a true blessing – this Mr. Len program. It evolved, and I just love it.”